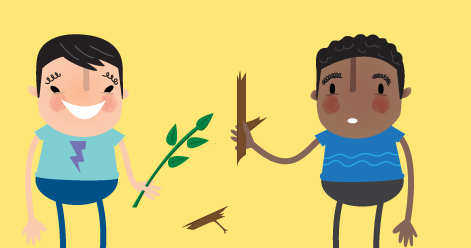 Compare a dry, brittle stick with a fresh and flexible green stick and talk about the ways people can be either rigid or flexible in their attitudes.

Pop a pair of garden sheers in your pocket, then take your kids out for a walk in a forested area.

Let your kids try breaking the sticks, as well as your green branch. (Hopefully the green branch will be much more flexible than the dry sticks and harder to break.)

Explain that sometimes people can be like dry sticks. Another term we use for them is “rigid” because they refuse to bend or adapt to changes in their routine. When things don’t go the way “dry stick” kinds of people want, they may pout, refuse to play or even have a tantrum.

On the other hand, people can also be like the green stick. They’re much more flexible in their attitude. They are willing to participate in games and activities suggested by others, and they don’t mind trying new things and new ways of doing things. “Green stick” kinds of people are pleasant to be around because they are easy going, cooperative and willing to try new activities or games. They are also more willing to adapt to unexpected changes in life.

As you continue your walk, or on your drive home, share these examples with your kids and let them decide whether the person in the story is being like a dry stick or a green stick:

Psalm 23:1-3 “The Lord is my shepherd; I shall not want. He makes me lie down in green pastures. He leads me beside still waters. He restores my soul. He leads me in paths of righteousness for His name’s sake.”

Proverbs 19:20 “Listen to advice and accept instruction, that you may gain wisdom in the future.”

1 Peter 2:25 “For you were straying like sheep, but have now returned to the Shepherd and Overseer of your souls.”