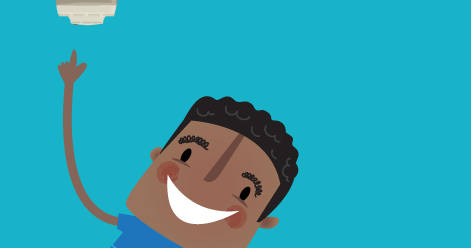 Science with a twist

Discuss the importance of keeping fresh batteries in a smoke detector.

Discussion point: Our conscience warns us that we are being tempted to sin; it’s important not to ignore it.

For this activity, you will need a smoke detector with a functional battery, a dead battery for the smoke detector and a noisemaker such as a whistle, a squeaky rattle or a toy. The ideas presented here emphasize that God gives us a conscience to help us be aware of temptation and potential sin, just as a smoke detector warns people of smoke and fire.

This is an ideal time to discuss fire safety and review your planned exit routes in case of a house fire. See the “fire safety rules” activity in the hands-on options section of this lesson for some basic fire safety rules.

Read 1 Peter 5:8, which says, “Be self-controlled and alert. Your enemy the devil prowls around like a roaring lion looking for someone to devour.” Explain how much Satan likes to make people sin. (Sin is doing anything that disobeys God’s rules outlined in the Bible.) Like a lion hunting, Satan waits until he sees an opportunity to tempt someone to do wrong. A lion loose in the house would be as dangerous as a fire. If we imagine Satan is a prowling lion, then whenever we think he is around, tempting us to sin, we need to go and sound off our “temptation detector” (our noisemaker) to warn everyone of the lurking danger of sin.

Discuss the concept of a conscience with your child. Explain that, just as we have smoke detectors in our homes, God gave every person an inner sense of right and wrong, which is called a conscience. Just as smoke detectors warn us of fire, our consciences warn us when we are tempted to sin. Smoke detectors are very loud, but our conscience is very quiet. We need to listen carefully when we have an uncomfortable feeling inside us that’s telling us we shouldn’t do something.

When we are tempted to sin, we can ask God to help us choose to do right. The Bible says that if we go to God for help, asking God to give us a desire to do right, Satan will flee from us. The other choice we have is to ignore the warning of our conscience and decide to sin. If we ignore our conscience often enough, it becomes like a smoke detector with a dead battery – it no longer sounds the alarm to signal potential danger. A conscience that has been ignored is called a “dull” or “dead” conscience because it loses its effectiveness in warning a person about the dangers of sin.

Finish your time together by praying. Ask God to help each of you have a sensitive conscience that will warn you to do right, even when Satan is prowling around tempting you to sin.

James 4:7 “Submit yourselves, then, to God. Resist the devil, and he will flee from you.”

John 16:7-9 “But I tell you the truth: It is for your good that I am going away. Unless I go away, the Counselor will not come to you; but if I go, I will send Him to you. When He comes, He will convict the world of guilt in regard to sin and righteousness and judgment…”