Cooperation > A tale of two squirrels 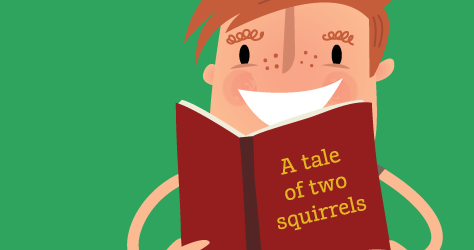 A tale of two squirrels

Read a story about a brother and sister who learned a lesson from two squabbling squirrels.

This is a true story, but with names changed and some imaginative touches added. Feel free to further reinvent the tale to make it more interesting for your children.

A tale of two squirrels

Once there was a squirrel family with two children in it – a brother squirrel and a sister squirrel. Momma squirrel needed help storing food for winter, so she asked Brother and Sister to collect pinecones while she travelled farther into the woods to collect some hazelnuts.

For about an hour the young squirrels worked hard gathering cones from an evergreen tree near their home. Brother tossed the cones down from the high branches and Sister ran to collect them and put them in their winter storage pile.

Just as they were growing a little bored with the work, Brother hit Sister on the head with a pinecone – and she didn’t like it one bit! She didn’t wait to ask if it had been an accident. Instead, she ran straight up the tree trunk and out onto the branch where Brother sat. Then she bit his tail hard!

“Your fur is an ugly colour,” Sister screeched back.

This continued for the entire afternoon. The squirrel children knew they would be in trouble for getting nothing done, but neither one was willing to say sorry and begin cooperating again.

Six-year-old Jackson and his older sister, Olivia, were in their backyard raking leaves. As they worked, they watched the squirrels. When their father came out to check on their work, the children pointed to the funny, squabbling squirrels. Their father started laughing.

“Can you guess what their mother is going to say when she comes back?” he asked Olivia and Jackson.

Olivia and Jackson thought back to something that had happened the day before, when Olivia and Jackson had been arguing over their chores. They always argued over chores – about who had to do what, who was working harder, and who was working faster. But this time, their mother had timed their argument. They had argued for seven minutes about who should pick up some spilled beads!

Olivia had demanded that Jackson pick the beads up, since he had knocked them off the table. Jackson said it was Olivia’s fault for not tidying the beads away.

Remembering the argument, Jackson answered, “I think the mother squirrel might say something like Mom said to us yesterday.”

“And what was that?” asked his dad.

Olivia recalled and repeated her mom’s statement: “You’ve wasted so much time arguing, you could have had that job done already.”

Jackson was distracted by the squirrels and dropped the bag that Olivia was loading leaves into. The leaves spilt all over the ground. Before either of the children could blame the other and start fighting, their dad started making the squirrel’s noise.

Both kids started laughing, and suddenly they were all throwing leaves at each other.

“Don’t pretend we’re squirrels, Dad!” begged Jackson. They heard more laughter coming from the direction of the house. It was their mother coming out to join them.

“I won’t call you squirrels,” she said, “unless I see or hear you acting like cheeky rodents again.”

After tossing some leaves at their mom, Olivia and Jackson worked with their parents to load all the leaves into the bag.

What do you think Olivia and Jackson’s parents said the next time the children started to fight instead of work?