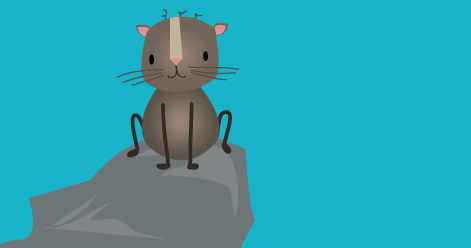 Study the fearless behaviour of the wolverine, the grison and the badger.

Discussion point: We must resist temptation and ensure we are not an easy target for Satan.

Some small animals are known for being particularly courageous, especially mammals in the Mustelidae, the weasel family. The wolverine, the grison and the badger are particularly courageous when they are threatened, facing their enemies with fearlessness. They simply won’t back down, even when threatened by a much larger animal! Despite their reputation for being fierce, these animals would not go out of their way to harm a person. Like most wild animals, they choose to avoid people. People are a much larger threat to these animals than these creatures are to humans.

Study any of the courageous creatures listed below in depth, or simply share a few facts with your kids to encourage them to be similarly tenacious in adverse circumstances. As you study these courageous animals, use their approach to problems as an object lesson on dealing with Satan. Other animals you may wish to study include the polecat, sable, fisher, marten, weasel, ferret, mink and stoat.

There are common sayings in Chilean (the native language spoken where grisons live) that refer to this animal’s ferocity and tenacity. One expression used to describe an aggressive or fierce person is “estar como quique” (meaning “to be like a grison”). Another expression is “malo como kike” (to be as mean as a grison), and yet another is “se puso como un kike” (referring to how a person “became like a grison”). Although these animals are very fierce, they can be tamed easily when they are young.

The wolverine has been described as a fearless, aggressive fighter that will drive bears away from their kills. Despite myths to the contrary, the wolverine not a vengeful killer. It is a scavenger by nature, feeding primarily on carrion and by preying on smaller animals like the ground squirrel (gopher). Although it will courageously defend its den and its food, the wolverine is not a troublemaker, nor does it fight for “sport.” This animal is not a significant threat to humans.

The badger is known for being an animal that won’t back down in the face of danger. On their website at Natureconservancy.ca, the Nature Conservancy of Canada describes the badger’s aggressive defence tactics. “Its muscular neck and thick, loose fur protect it when an animal predator strikes. These defence mechanisms give it time to turn on the predator and bite or claw it. When a badger is attacked, it also uses vocalizations. It hisses, growls, squeals and snarls. It also releases an unpleasant musk that may drive a predator away.” Like its cousins, the grison and the wolverine, the badger’s fierceness makes it an unappealing target for predators.

If confronted by an enemy, the wolverine, the grison and the badger face it head on! That is our best approach when dealing with Satan too. The Bible says that in order to make the devil flee, we are to take a firm stand against him and submit ourselves to God instead. Imagine the wolverine or the badger up against an enemy. They make an aggressive growling sound, hiss and snarl and show their sharp teeth. They are telling their enemies, “Don’t mess with me!” When Satan prowls around, tempting you to sin, you can react like the animals of the Mustelidae family and let him know that you are not someone to be messed with, because you have God on your side. God does not want us to fear the devil; rather, He wants us to live free from fear, trusting in Him for strength.

After you have investigated your animals of interest and read some of the related Bible verses, pray with your children and ask God to help them to be as feisty as a ________ (the animal they enjoyed reading about) when Satan tempts them to be fearful or to sin.

Joshua 1:9 “Have I not commanded you? Be strong and courageous. Do not be terrified; do not be discouraged, for the Lord your God will be with you wherever you go.”

Matthew 10:29-31 “Are not two sparrows sold for a penny? Yet not one of them will fall to the ground apart from the will of your Father. And even the very hairs of your head are all numbered. So don’t be afraid; you are worth more than many sparrows.”

1 Corinthians 15:56-58 “The sting of death is sin, and the power of sin is the law. But thanks be to God! He gives us the victory through our Lord Jesus Christ. Therefore, my dear brothers, stand firm. Let nothing move you. Always give yourselves fully to the work of the Lord, because you know that your labor in the Lord is not in vain.”

James 4:7 “Submit yourselves, then, to God. Resist the devil, and he will flee from you.”